You are here: Home / Courageous Self-Care / What’s in a Word? 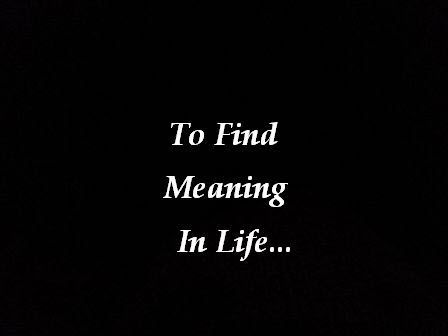 I’ve had a long-standing love affair with words.  During high school and college, while studying Latin, French and Spanish, I became infatuated  with words and their origins.  In early adulthood, I amusedly discovered literal commonalities among “dirty words” across language and cultural boundaries.  Over time, I have come to a deeper, more mature relationship with words.

My mom was a continuing fount of wisdom in my evolving relationship with words, nurturing a curiosity to know more than what’s simply IN a given word or its origins. For example, if someone was injured, she would opine whether they were actually “broken” or perhaps simply “bent”.  And, if mom was in pain, she would often distinguish between whether it was a “hurting” or “healing” pain.

Years later, I am able to extract ever deeper, more personal meanings of my life experiences.  Sometimes, it’s by inquiring, “What does this particular word mean for me, within this particular experience?” or “How does this word help me ‘make sense of’ an experience?”  Increasingly, it’s helpful to ask, “What lies ‘between’ multiple words and symbols that emerge out of my experiencing?”

In preparing to write this article, I invited an inner sense of what wanted to be written concerning “finding meaning”– this 11th dimension of wellbeing.  First came “felt meaning”—coinciding with my dog, Blue, standing up next to me, physically “asking” to be petted.  A moment later, Blue went back to his own quiet place on the floor.  I, too, sat quietly.  Then, suddenly, Blue was back–this time pushing his nose determinedly through my arm….with a firm insistence.  Ah, perhaps I also want to emphasize the idea that acknowledging one’s feelings always plays a role in the meaning-making process.

A few more moments passed.  Blue was again lying quietly at my feet as I began to freshly acknowledge something inside—a recognition of how often I find it difficult to give voice to my feelings…..to identify them…..to say them out loud.  Suddenly, Blue began quietly growling at something unseen.  It almost seemed as though he was offering a quiet reflection of my own inner feelings.

Ah, there’s a low grumble of sadness.  Expressing my feelings was something I was never allowed to do.  Moreover, there’s a wanting to express my feelings.  Except, it’s a fearful, growly-protective sort of wanting…as if it half expects to be squashed or scolded.  There’s also a tightness, somehow related to that fear.  Yet, there’s also a sense—even with my eyes closed—as though the sun had come out…a momentary, wondrously warm light…..that would graciously accept and welcome my expression.

I smile when the inevitable yawn comes.  These yawns have become a kind of shorthand reminder [for me] for letting and allowing…for accepting multiple channels of meaning-making as a way to understand my own life-experiencing…for opening fresh pathways for living forward. 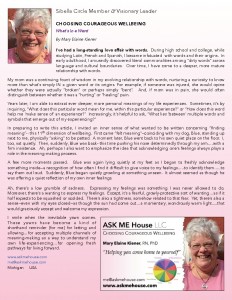 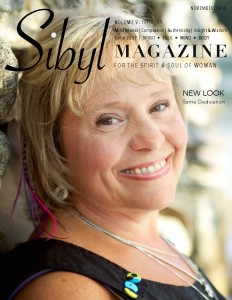 *  Originally published as => Kiener, M.E. (2016, November).  Choosing Courageous Wellbeing:  What’s In a Word?  Sibyl Magazine. For the Spirit and Soul of Woman.  Retrieved from www.sibylmagazine.com.