You are here: Home / About Mary Elaine (aka “ME”) / Personal Bio 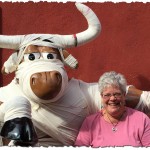 On a more personal note, my own life experiences have offered me countless opportunities to learn and practice the art of self-care amidst challenging circumstances. 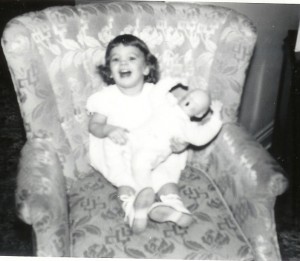 I won’t bore (or overwhelm) you with the details.  Let’s just say that after being born in 1950, I have lived what one friend described as “an enormity” of a life.  Not necessarily “major” losses (in and of themselves), but enough in number and variety to take their toll when piled on top of each other–especially when I wasn’t “paying attention”–and before I had learned to deal with them.  Not surprisingly then, in my early 40’s, I found myself adrift in life–having lost touch with both my health and sense of purpose.

I understand far too well the struggle to honor one’s own uniqueness within a world of self-proclaimed gurus and cookie-cutter solutions.  Ever the Resource Queen, I found myself searching far and wide in order to create a way back to myself, while also tending my late husband and long-distance caregiving with my mom. 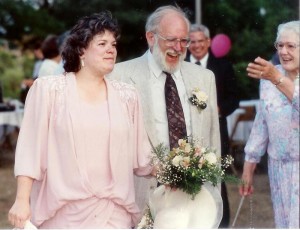 I had remained single until age 41, when I married Alex (he’s the “ASK” of ASK ME House, as his full name was Alexander Stanley Kruzel).  Then, widowed at age 55.  No “birth” children, but lovely sets of “bonus” children (both “step” and “god”), grandchildren and even a couple of great-grandchildren [Yowza!]. 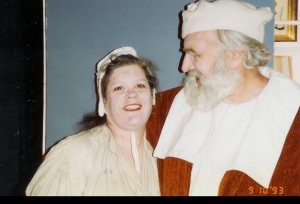 Alex and I shared a love for singing and acting.  [To the right is a photo from our work together in The Crucible.]  For Alex, theatre was a great social outlet.  By nature, I tend to be someone who likes to “dig a little deeper” into life.  So, I’ve had a lot of musical training (both piano and vocal) and even immersed myself within a method acting workshop for nearly a decade.  I haven’t done live theatre lately.  Still, I usually find a way to integrate some aspect of expressive arts into my work.  And, singing is still an important activity.

My mom would probably have told you that I “like to live life on the edge.” [At least, that’s what she told me on several occasions!]  She also said that I was “supposed to be a teacher, ’cause I read so much.”  And, my oldest brother once marveled at how I somehow “always manage to cultivate roses even (especially?!) when I’m buried in a manure pile.”  [By the way, I was the youngest child–and only girl with three older brothers–which probably already explains a lot right there.]

During college (1968-73), I had intuitively gravitated toward early expressions of wellness and holistic philosophies of care.  However, during the first 20 years of my professional career, I found myself increasingly bewildered and frustrated as I tried to find my voice within the jungle of disease-focused allopathic health care traditions.  By my early 40’s, the mismanaged stress within both my personal and professional lives collided, culminating in a fairly major health “meltdown” in 1993-94.  [In this photo, I’m in costume for a role as an 80-something woman.  Although my chronological age was actually 40, I believe my overall health status (inner age) at that time more closely resembled the character I played.  By the way, I also won a “Best Character Actress” award for that role!]

I know what it took to learn what I’ve learned during the past 25 years.  And, while we each have our own unique needs and ways of doing things, there’s absolutely no need for you to struggle to find the way that fits best for you.  Nor do you need to stumble through a path of trial and error without support or guidance.

I’ve been told I’m a wonderful listener – especially to those faint whisperings at the learning edge of peoples’ lives.  I’ve also been called a “transformation midwife” [and, NO, I don’t “birth babies”…..rather, I help you birth your own homecoming–to help you “come home to yourself”.