You are here: Home / About Mary Elaine (aka “ME”) / About ASK ME House

Where did the name ASK ME House come from? 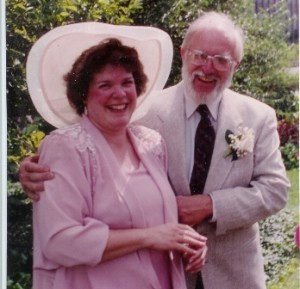 Here’s a little hint:  Alexander Stanley Kruzel and Mary Elaine Kiener  (that’s us, pictured on the right, on our wedding day, July 27, 1991).

Before we met, we had each used our initials.  Alex had a side business called ASK Enterprises and I had used “me” in my signature line for years.  When we sent out the wedding invitations, it made perfect sense to christen our beloved home as “ASK ME House.”

For the longest time, my mom would laughingly begin our phone conversations with “what should I ask you?”  And I would respond with the following [10 sec] audiologo:

Two years later, ASK ME House also became a business:  serving as a Bed and Breakfast for 10 years.  I remember one of our earliest guests praising my “good judgment” in not calling our B&B the “ASK ME Inn”  (sigh!) while advertising gurus argued that it should be called that.  Stubborn one that I am, I hated being “cute and obvious” and still love it when people ask me “what’s it all about?”

In 2003, ASK ME House reverted back to its former status as a private residence.  Alex was terminally ill at the time, and he died in April, 2005.

I had also begun to develop what eventually became stresswell™ and began envisioning a more “virtual” (vs. brick and mortar) business presence.  And, as you can hear below, reflected it within an expanded [31 sec] audiologo:

By 2007,  I began to ease out of my sabbatical of learnin

g, growing and healing following Alex’s death. At that time, I adopted a new business structure, which became ASK ME House LLC.  It seemed only fitting.  Alex had often commented (albeit sometimes between gritted teeth) that he was the silent partner in my work.  Now, I still feel his presence and support—except that he’s simply a lot more quiet (and less critical!) than before.

In 2008, the house declared that it was ready to “go back to work.”  Thus, the birth of ASK ME House Presents….. We started with occasional house concerts, and gradually added workshops and other activities.

If any of this intrigues you, I’d love to hear from you and/or have you join our virtual Courageous Wellbeing Community.