You are here: Home / Courageous Self-Care / A Pause within Moving-Forwardness 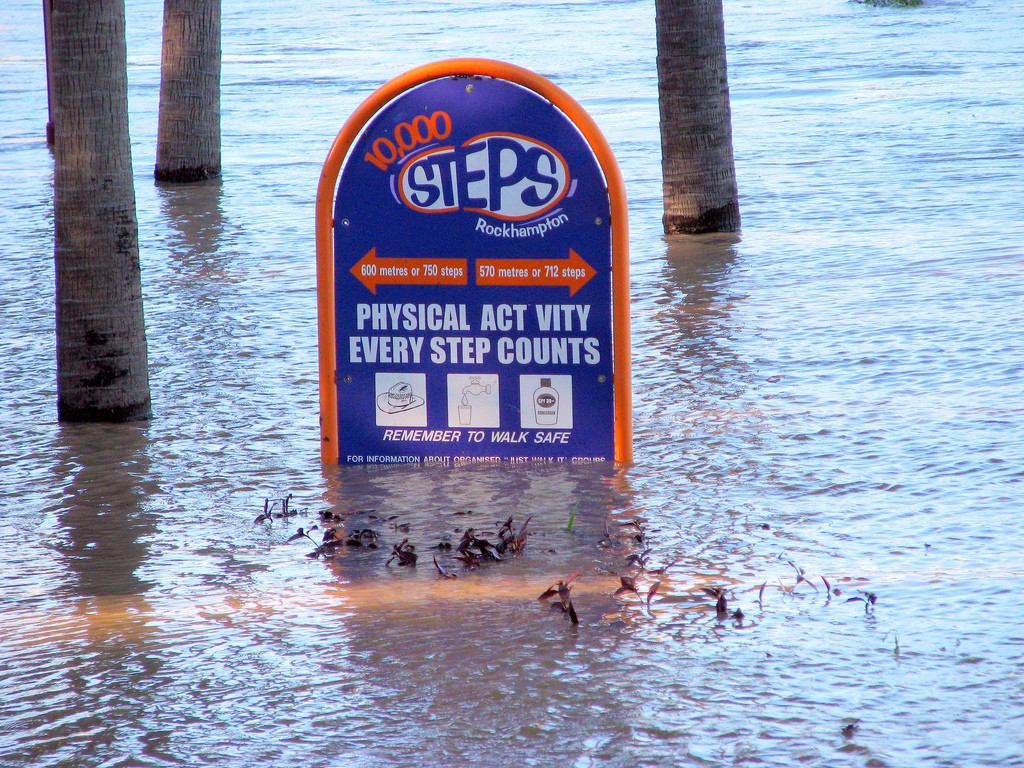 Yikes, the exercise gods had spoken. Or, maybe just the Fitbit goddess on my wrist.

For years, I’ve strived to consistently meet the minimum recommended goal of 10,000 steps per day. It never seemed to matter whether you got them in all at once or whether they were spread out through the day.

Fitbit recently raised its ante with a new challenge: track how many hours you move 250+ steps. At first, it was fun exploring 250-step “equivalents” (e.g., 8 round-trip stair climbing between the 1st and 2nd floor or 7 “circles” around the first floor of my house, etc.). Blue (the dog) certainly enjoyed the game, trotting along merrily at my heels. It soon felt stressful—rather than playful—as I started conjuring how to “game” the tracking system itself: perhaps by walking 500+ steps at the top of each hour, I could then get credit for two separate time-blocks.

Until, in a rather unusual way, “inertia” stepped in. I had just read a recently published article that referenced inertia from its use in physics: “The property of matter by which it retains its state of rest or its velocity along a straight line so long as it is not acted upon by an external force.” I was particularly intrigued with the idea of inertia being able to include “velocity”. So, I decided to allow the Fitbit to simply continue tracking both my moving and non-moving, while I shifted my attention to more intricate facets for this dimension of wellbeing.

At first, there’s this whole thing about…moving as it relates to time. If time moves forward and I stay put, then I get “stuck”. Yet, if I move out of rhythm with time (so that I’m either ahead or behind), then I’m out of sync. The image of a river’s current spawns a curious wondering about my way of being in the world. Is wellbeing a future-time goal or outcome that I achieve only by crossing through the current to reach the opposite shore? Or, is wellbeing somehow “flowing” in the current itself? Ah, yes, what I long to find: a way to be in synchrony with the flow of time so that there’s both a sense of moving and being still–in the moment, in the now.

Gradually, a concept of “inertly moving” shifts into a sense of “moving forwardness” even while still. A fresh image comes – of sitting inside a train, next to another train. There’s a sense of movement, although hard to distinguish which train is actually moving. Then, I remember encountering a glacier, a river of ice—its own forceful power constantly moving, albeit imperceptibly.

Ah…”moving stillness”…movement that comes from the stillness…offering a pause in my moving-forwardness. And, now, by odd coincidence, the Fitbit has suddenly and permanently “paused”—no longer willing to track ANY movement!

*  Originally published as => Kiener, M.E. (2016, May).  Choosing Courageous Wellbeing:  A relationship with food.  Sibyl Magazine. For the Spirit and Soul of Woman.  Retrieved from www.sibylmagazine.com. 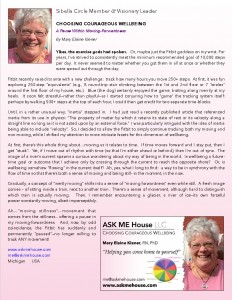 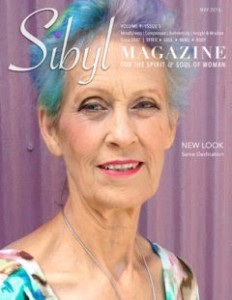