You are here: Home / Courageous Self-Care / A Sense of “Being With” 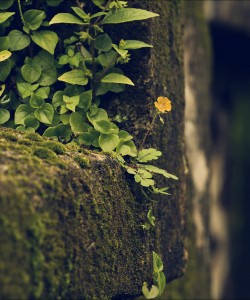 “Are you ok?”  The young man’s concern penetrated my awareness.  Moments earlier, we had both been part of a group elsewhere in the building.  I had slipped away from the group to respond to an unexpected text message I had just received.  He had followed close behind.

He told me that he had purposefully followed me out to the hallway and that he often finds himself choosing to “hang on” with someone to help ease his anxiety.  How fascinating, I thought–for I already noticed I was experiencing a bit of anxiety inside me as well.  Except, mine had stemmed from sensing him simply wanting to “hang on” to my presence.

The next day, I spent a few moments inviting a fresh inner sense of the “all that” around this interesting dichotomy.  First, I remembered being a young girl, when my younger girl cousins would come to visit and tend to follow me around, as if to “hang on” to my every action.  And, then, a more recent, contrasting memory emerged.  Following an out-of-town trip getting to know a new friend–he told me how abandoned he felt when at one point during our visit I had “walked away from him”.

Sitting there with both of those memories, tears began to well up in my eyes–that sharp, salty, old, deep, emotional kind of tears.  I could also sense the tears in front of me–on my upper right side.  As if standing behind it, I began to sense of how anxious that place inside feels to have someone around too much, or to be among too many people at once, at the same time.

Yet, even as I stayed with that place, a part of me moved around to stand a little bit to the right of the teary place.  As I looked on it from the right side, there was a vague wondering of….very early on….did someone push ME away?  Was there someone who didn’t want me?   As I said those words aloud, the teary place felt suddenly heard.  Fresh, cleansing tears began to flow.  This time, tears of recognition that I had never encountered that question–that possibility–in quite that way before.

With the tears, arrived a deep (almost knowing) understanding of my mother’s probable challenge–how to welcome and cherish a long-hoped-for daughter into an already exhausting household filled with the energy of 3 boys under the age of nine.  No wonder it seemed as though she never quite knew how to be with me…until, much later in life, when we learned how to be with each other.

I sat a few moments longer, appreciating different perspectives of “being with” another.  Suddenly, a cold, wet nose captured my attention.  Ah, it’s Blue, that delightful, new 4-footed guy in my life—an altogether different “being with” story! 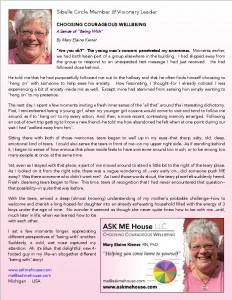 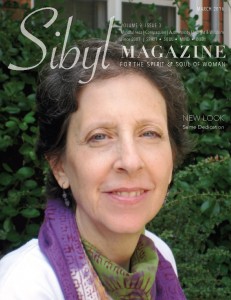 * Originally published as => Kiener, M.E. (2016, March).  Choosing Courageous Wellbeing:  A sense of being with.  Sibyl Magazine. For the Spirit and Soul of Woman.  Retrieved from www.sibylmagazine.com.