You are here: Home / Courageous Self-Care / Embracing What Chooses Me 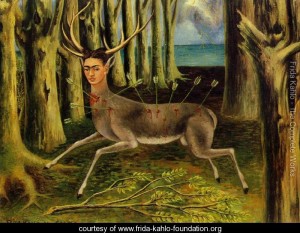 “Pause–and then, without looking, select the one that has already chosen you”, Sibyl instructed as she handed a small stack of postcards to the person seated closest to her.   And, so began one of the circle gatherings Sibyl led for the small group of woman who had joined with her for a magical week in San Miguel.  We waited until each had a card lying face down on the table in front of us.  Then, all together, we noticed that each of us had selected a different self-portrait by the Mexican painter, Frida Kahlo.

I held the image in which Frida’s face replaces that of a wounded deer standing alone in the middle of a forest clearing, its back and chest pierced with arrows dripping with blood.  As I pondered its message for me that afternoon, the words that came were simply “wounded healer”.   I sensed there would be more to come – and in the days and weeks since my return home – more has come, allowing the painting’s gift for me to grow gradually clearer.

I have learned about Frida—gaining an understanding about her work and the life that inspired her painting, as well as how she used her art to articulate her story while finding her own way forward.  During an interview about the 2002 film entitled “Frida”, Salma Hayek (who portrayed Frida and also served as co-producer) explained the conscious choice to emphasize Frida’s inherent vitality within the story, in spite of the long-lasting pain and medical complications that often left her hospitalized or bedridden throughout her adult life.

It’s just now, as I’m writing this article that I have found the painting’s title:  “Poor Little Deer”.  I chuckle a bit at the irony:  so often we respond to another’s pain and suffering with an exclamatory “Oh, you poor dear!”  Our words are often reactively pity-filled, fueled with our own fears around “but for the grace of god, go I”.

I’m reminded of my mother’s tongue-in-cheek differentiation between someone being “bent” vs. “broken”.  And, then, of a mentor’s gentle nudge as I once considered how to deal with a challenging colleague.   Was I seeing her as broken and in need of fixing?  What might change if, instead, I could view the other as creative, resourceful and already whole?

My learnings entice me to someday travel deeper into Jung’s world of archetypes and Nouwen’s subsequent writings about the wounded healer.  Perhaps, there, I might also discover fresh ways forward during this next phase of my life and work.

Yet, for this moment, I will begin by choosing to acknowledge and embrace my own oft-bandaged wound as its own source of healing.  Trusting that–without belaboring my own experience–I can lovingly listen and respond to another’s pain from within my own space of courageous wellbeing. 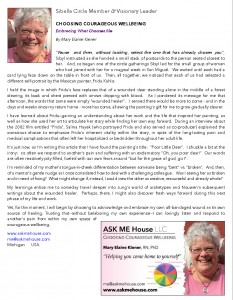 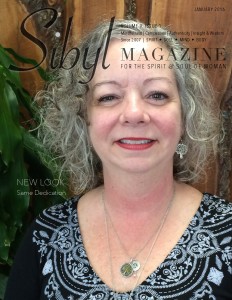 *  Originally published as => Kiener, M.E. (2016, January).  Choosing Courageous Wellbeing:  Embracing what chooses me.  Sibyl Magazine. For the Spirit and Soul of Woman.  Retrieved from www.sibylmagazine.com.

Sign up to receive email notifications when a new blog article is posted.

We respect your privacy and you can unsubscribe at anytime.