You are here: Home / Archives for Stresswell / Transcending

Saying good-bye to Tom Pigott was NOT on my agenda for today.*

Then again, I’ll readily admit that hearing news that someone I care about has died is not something I would easily put on my “to-do” list for ANY day of the week.

For as Mary Oliver writes in her poem, The Summer  Day:

Doesn’t everything die at last, and too soon?

I met Tom in June, 2010 while I was on a tour of Ireland that was directed by Tom’s company, and hosted by my friend (and colleague/mentor) Brian Luke Seaward.  It was indeed an enchanted (and enchanting) trip for me – and for a lot of reasons.

And, meeting Tom–this bigger-than-life, huge-hearted teddy-bear of a guy with a lovely voice to boot–was an unexpected bonus.  Our paths had crossed at a time–and in a way–that magically captured a piece of my heart.   In this You-Tube clip, you can get a taste of Tom–the tour guide, story-teller and singer.

Tom sure seemed to have figured out what to do with his “one wild and precious life.”  He had a profound love for his native Ireland, an unbounded pride in being Irish and a special gift for sharing Ireland’s music, language and stories.

And, perhaps even more importantly, he was able to reach the end of his life in the same way he lived it.  I’m told that he died of a heart attack while participating in an Irish Music cruise in the Caribbean.  A Facebook update reported that:

He was feeling good and laughing with all of us just minutes before he passed. We were listening to an Irish session  which was what he loved and enjoyed.

Earlier this evening, a number of us who had participated in the Summer Soul-stice Riff Raff Tour of 2010 gathered virtually under our respective view of the moon–each in our own way to offer Tom our wishes for safe passage, love, and peace on this new phase of his journey.

For many of us, those moments included a song that had bound us together throughout the trip and afterwards, entitled  Safe Home by Johnsmith.

The lyrics seem especially appropriate for the occasion, especially the chorus:

Rest in peace, my friend! 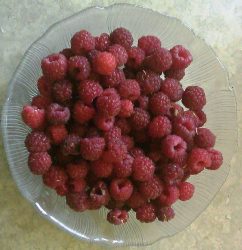 NOTE – this blog post even has some background music [ These Foolish Things – Chet Baker ] to go along with it.  So, if you’ve got the sound turned “on”, you might want to click on the above link to listen along while you continue reading.

It had all started in the raspberry patch one morning as I was harvesting the first of the season’s raspberry crop.  And during some “across-the-fence” visiting with neighbors, Penny and Marilyn, I happened to mention that it was the first anniversary of my mom’s death.

As I worked my way through the tangle of brambles, enjoying the luscious sweet taste on my lips as I sampled a few of the plump-ripe berries, I remembered how mom would drop everything when presented with a bowl of fresh-picked raspberries.  She’d sit quietly, eating them one-by-one, savoring each one while dutifully emptying the bowl of its delights.

As I returned inside, I began to notice even more “foolish” things that daily serve to remind me of mom’s continuing presence in my life:

So many sweet memories.  Isn’t it amazing how such simple things can stir up so many memories?

I appreciate being able to share some of my memories and stories with you – and would love to hear some of yours.

So, what are some of the simple, foolish things in YOUR surroundings that bring back sweet memories of loved ones?

Feel free to leave a comment below, or send me an email.

I LOVE the little synchronicities of life, don’t you?

At 6:36 am on Sunday, July 4, 2010, my oldest brother phoned me with the news that my dear mother, Elaine Kiener, had passed away that morning at 5 am.

At 7:36 am, I received an email (from a Google Group that explores the crossings between  Nonviolent Communication and  Focusing.

In that email, a colleague shared a poem entitled:  Your Mother and My Mother by hafiz.

Fear is the cheapest room in the house.
I would like to see you living
In better conditions.

For your mother and my mother
Were friends.

I know the innkeeper
In this part of the universe.
Get some rest tonight,
Come to see my verse again tomorrow.
We’ll go speak to the Friend together.

I should not make any promises right now,
But I know if you
Pray
Somewhere in this world–
Something good will happen.

God wants to see
More love and playfulness in your eyes
For that is your greatest witness to Him.

Your soul and my soul
Once sat together in the Beloved’s womb
Playing footsie.

Your heart and my heart
Are very, very old Friends.

Such a beautiful poem and message – in its own right.

And yet, even more fitting considering that I had been with my mom a few years before as I watched her NOT die (all within a peaceful sleep), and had also been with her during times of panicked breathlessness.  I am so grateful to know that fear was not a companion along her final journey. 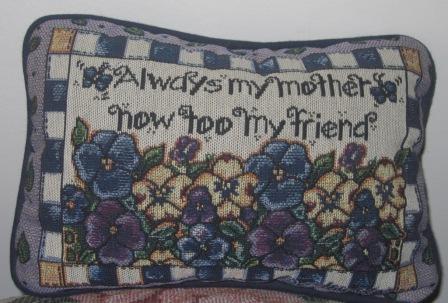 There’ve been times in life
when I’d felt like a mother-less child,
adrift at sea
with no land in sight.

But those were different long-ago times
When neither she nor I
knew how to be–
one with the other.

Then through the past two decades,
travelling simple journeys together,
mother and daughter learned to also become friends.
Content to simply be with each other–
watching and waiting–with neither judgment nor expectation
nor even need at time for words of any kind.

Yet now in this moment -barely a single day
since the mom has died,
I, her daughter, greet this new day
on the threshold of the rest of my life. 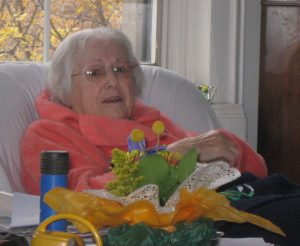 Never again to sit together,
nor again to see her look of pure delight and happiness
as she’d open her eyes to see me there with her.
No one last “Tussie Mussie” bouquet
lovingly carried from my home to hers,
Nor bowl of fresh-picked raspberries
For her to lovingly devour.
And no more tales of days gone by,
sharing both laughter and the tears
of being two strong women –
the only mother and sister
to three long-grown men.

With memories of that mysterious, witnessed moment
once on a day she didn’t die,
alongside other breathless, panicked moments
when she’d feared she’d die afraid/alone—
knowing now she’s found her peace at last.

And while I’m no longer by her side,
Content and grateful just to know
she’s resting there deep within my heart
Even as I proudly carry forever
HER name within my own.

Once upon a time, when I was a little girl, a mysterious, tall green stalk magically began to grow two stories beneath my bedroom window.  It had appeared in the flower bed, snuggled up so tightly against the sidewalk that we knew no human being could have planted it there.  At the time, it seemed that no one even knew what kind of plant it was.

Then, one day, the mysterious stalk revealed its wondrous blooms.  And later, when the blooms were spent, it seemed to die.  Except each year, again and again, the magical stalk again emerged from the soil to repeat its blooming refrain.

Many years later, my mom had enjoyed another Amaryllis bulb miracle.  No mysterious planting this time–the bulb had arrived nestled inside a florist’s basket.  A perfect gift for my mom—for whom one of her greatest (and simplest) pleasures is to sit and watch flowers bloom.  This special bulb—which grows at a pace that you can almost observe–provided a bright spot in her one-room, assisted living space.

Once its blooms had been spent, mom sent the bulb home with me, with the hopes that someday it might bloom again.  For a few weeks, it sat on a shelf near my back door, enjoying occasional sips of water as its drooping leaves continued to feed the bulb.

Until one day, I noticed that a new stem had begun to send up its pointed tips.   Gradually, another set of blossoms appeared at the tip of the magical stalk, bringing a double round of enjoyment – both for me and to share long distance with my mom.

And then, wonders of wonders:  yet another stalk began to climb—stretching upward toward the still-present blooms.  And as this latest stalk (the bulb’s third in as many months) reached its lofty destination, the final bloom from the second stalk completed its own cycle.

For me, an amaryllis bulb is no longer simply a mysterious gift from within my childhood garden.  It is also both memory and a reminder of the magical beauty that exists in the world.  Or, as Muriel Barbery writes in The Elegance of the Hedgehog, an “odd moment of beauty, where time is no longer the same….[rather] a sort of interlude in time, something suspended, an elsewhere that ha[s] come to us.”

May your own life be blessed with many “odd moments of beauty” that both suspend and transcend time, while linking you with thoughts and memories of those whom you love. 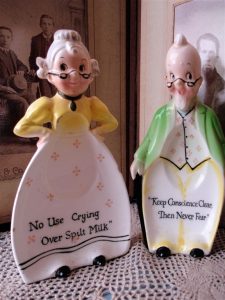 Some days bring us costly lessons. Some lessons simply cost us money.

Today’s lesson came in the form of my monthly telephone bill. As I briefly scanned the bill, I felt (and then heard) the sudden gasp escape from my throat: the amount due was TRIPLE its usual cost!

As I looked further, I discovered that the additional charges stemmed from a business call I had placed last month to the Bahamas. My colleague and I had experienced several delays in making scheduled appointments–due in part to interruptions in her internet-based telephone service, plus we had dismissed her cell phone option as too cost-prohibitive. So, when she gave me a new land-line number to use, I didn’t even think twice. I made the call and we had a productive 60-minute conversation. What I didn’t know at the time was that the call was being billed at my phone company’s “primetime overseas rate.”

Yikes! But also, DUH! I’m so spoiled with my unlimited long distance service plan that I didn’t stop to think that it only covers the US. Plus her phone number “looks” like a regular US number (that is, it doesn’t have any international code prefix to the number).

Once upon a time, I probably would have reacted with anger, frustration and tears, punctuated with feelings of blame and self-loathing for having made such a “stupid” and costly mistake. I might have then railed against the telephone company for what I believed to be exorbitant rates, and/or harbored a lingering, unspoken sense of bitterness toward my colleague for not having “protected” me from my ignorance.

Instead, this morning, I chose to take a deep breath and quietly pay the bill. And, without shame or blame, acknowledged my simple (albeit costly) error in judgment, that was based merely on my not knowing that which I didn’t already know. And then pondered some lessons to be learned from my experience–to help me and others not make a similar mistake in the future.

There are days in life in which we learn costly lessons. And some days in which our lessons simply cost us money.

Learning how to avoid the first type altogether while also minimizing the second is perhaps one of our most important lessons in life.